The Artist
The show
Technical Specs Arturo Brachetti is an Italian artist, famous and wordwidely acclaimed. In many countries he is considered a living legend in the world of theater and visual performing art. Also is an attentive director and a passionate artistic director, capable of ranging from comedy to musicals, from magic to variety.

Brachetti is now the greatest quick–change artist in the world, with a “gallery” of more than 350 people, of which 100 interpreted in one evening.

The greatest quick-change artist in the world Sorry, no posts matched your criteria.

It’s a journey to discover classical music in which the audience, led by the hand of an exceptional guide, lives a real experience in “magic and notes”. The formula is the “concert-performance”, which has already been successful: a stage setting that speaks to the general public, bringing it closer with ease to classical music. It’s a great national project. An innovative way to offer the concert that is suited for everyone: easy, dynamic and engaging. It binds well entertainement, music and cultural dissemination to a single show.

The project is the brainchild of Arturo Brachetti shared by the Orchestra Sinfonica Nazionale della RAI, with the intent to merge classical music with elements of theater and comedic effect: a concert that combines two worlds, to watch and listen’.

The goal is to enhance and popularize classical music, entertaining audiences via “visual form.” You get to a different target (wider, popular and young), not accustomed to cultural custom of the classical concert. The concert was included in the season of the National Symphony Orchestra 2012/13, on May 27, 28, 29, performed at the Auditorium Rai in Turin, and broadcast on RAI5 and RAI3 on ​​several occasions.

Peter and the Wolf Peter and the Wolf by Arturo Brachetti is an striking edition of the well-known fairy tale–concert music by Prokofiev.
Through the magic of Arturo Brachetti, with the complicity of the orchestra and multimedia inserts, the viewer experiences a fun and engaging experience that takes him in the world of classical music.

In the room the lights are dim and on stage an orchestra illuminated by sunset awaits the master. Gurgling pond, gusts of wind and dogs howling in the distance can be heard. It is the atmosphere of a peaceful countryside setting in the end of June.

The maestro arrives on a “steam train”. Impatiently, as if someone was missing, he sets the tone and the orchestra begins the march.
And here comes from the hall the composer, Sergei Prokofiev (Arturo Brachetti), on an old bike. He is carrying a folder of sheet music that he loses on the way, that he distributes to the musicians, throws them to the public, makes airplanes... he seeks consensus but no one listens.
On the last note, the magic: Prokofiev turns on itself and becomes Arturo. Brachetti greets the audience, directly involves the audience and explain to them that if you want to hear this, you have to have a light heart, like children do. From here the tale is told… 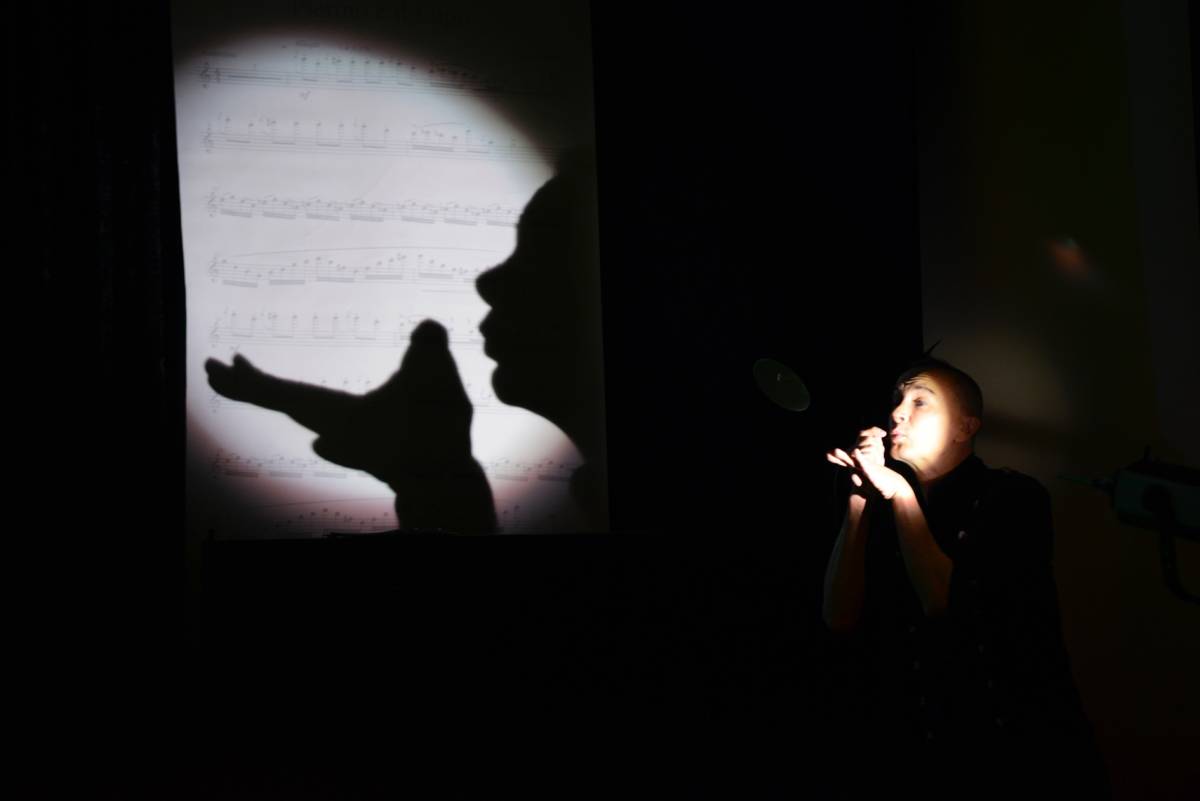 The characters, represented by musical instruments, come into the picture. Brachetti makes them live through effects and amazing tricks: from galanty shows to video projections in which the narrator goes “in and out”, from water splashes on the audience  to the bird (a blue handkerchief) flying over the heads of the spectators until the … capture the wolf!

In the final parade, Arturo quick-changes with his extraordinary speed playing all the characters of the tale in a dynamic ensamble that involves artists, musicians and the public.

The drawings and animations of Peter and the Wolf are drawn live by the artist Andrea Aste. 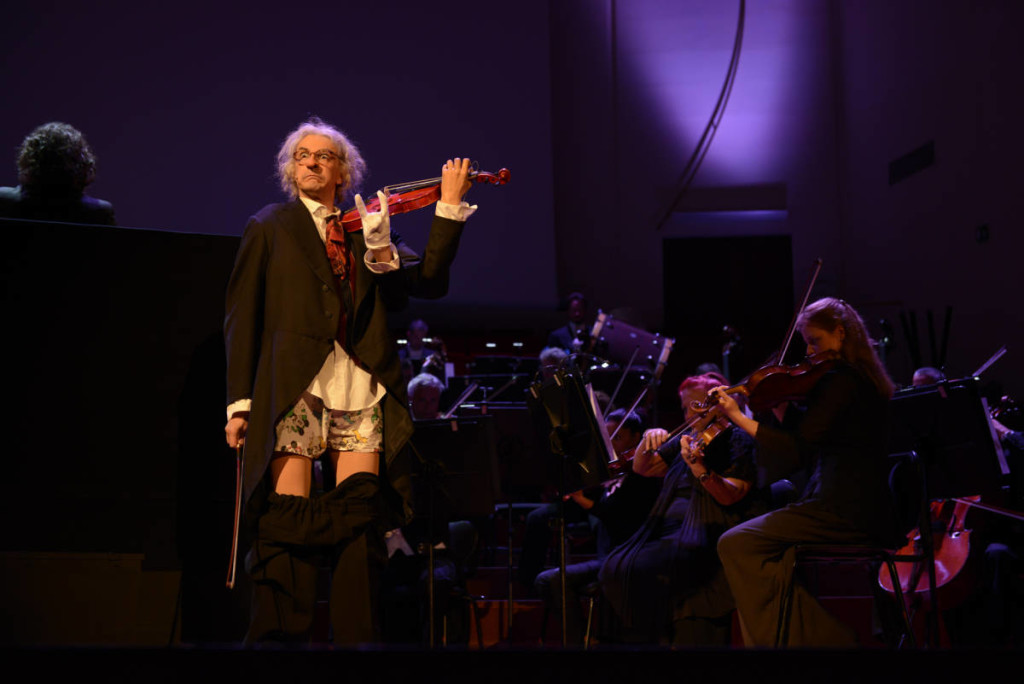 The second part, more playful, which runs for about 60 minutes, is a musical divertissement where Arturo tells the story of music, plays and conducts the orchestra, making fun of the world of classical music.

It starts with Arturo as a virtuoso violin player desperately trying to carry out the execution of the famous Litsz’s rhapsody. In the style of a living cartoon, with a series of visual gags, Arturo is continually interrupted by a third hand that tries to steal the bow and provides hitches.

Here Arturo explains to the audience that one of the most important things in the tradition of concerts, is the entry into the podium of the Director. The audience witnesses different types of directors who, echoing some classic stereotypes, helps the public to understand the different styles: the authoritarian German, the fine French, the experimental American, and so on.

Between all the parts Arturo shows us a “musical” personal interpretation of the famous Carosello, classic Italian commercials, with funny parodies.

The most poetic moment of the show brings music to the stars. Arturo paints with sand on a light table, representing all 12 signs of the zodiac accompanied the execution of the wonderful St. Paul’s Suite by Gustav Holst performed by the orchestra.

Arturo is now a skilled director  and expresses his “talent” by heading in different ways a smash hit, “O che bel castello marcondirondirondello“.
But he does it in different styles and turning into the most famous composers: Mozart, Verdi, Chopin, Rossini and Offenbach, will come alive on the stage, between the orchestra and projections on the screen.
The spectacular and full-of-suprises show closes on a funny version of Offenbach’s “can-can” dance. The equipment and facilities requirements may vary after the site inspection in theater.

FOR OFFERS AND ESTIMATES PLEASE CONTACT THE PRODUCERS –  giorgio@brachetti.com